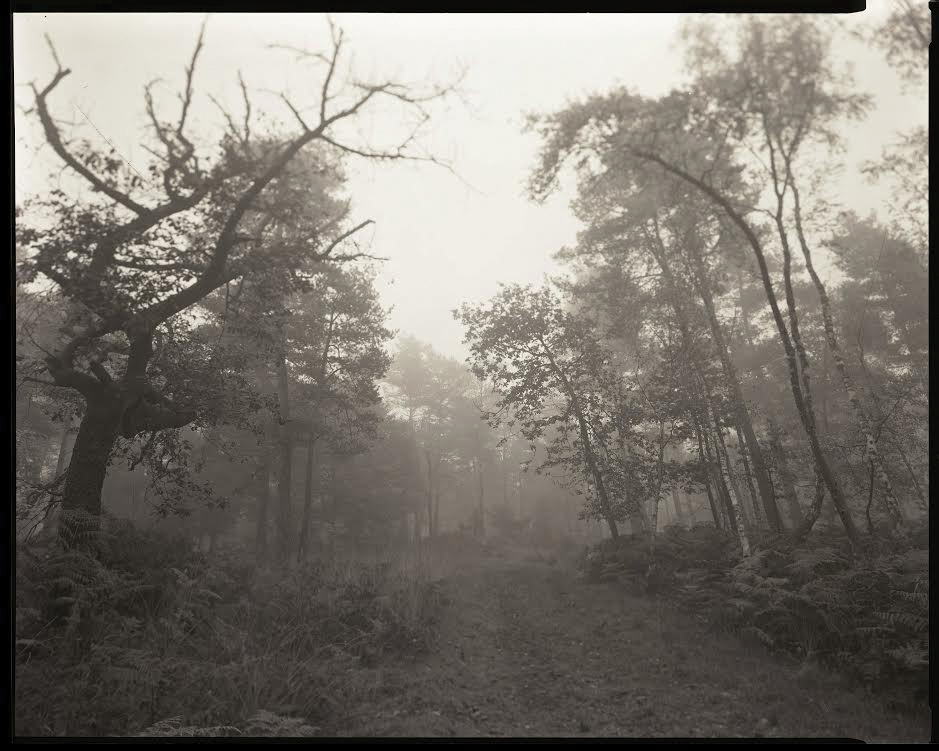 The Forest of Fontainebleau (or Forêt de Bière, the “forest of heather”) lies an easily accessible sixty kilometers southeast of Paris.

Widely promoted by Parisian Jean-Baptiste-Camille Corot, the leading painter of the Barbizon school in the mid-nineteenth century, the forest of Fontainebleau famously attracted and inspired artists and photographers alike. Used both as a retreat and source of inspiration, Fontainebleau appeared as the subject matter in innumerable paintings and photographs that were visions of the elegance and simplicity of the Forest. Artists sought to emphasize the importance of Nature, rather than subjugate her to the background of an animated scene.

Due largely to the entrepreneurial efforts of Claude François Denecourt who ‘discovered’ the forest in 1832 at the age of 44, and subsequently dedicated the remaining years of his life to its preservation and promotion, the Forest at Fontainebleau, village of Barbizon (for which the painter’s school was named) and the surrounding areas became a mecca for an estimated 700 painters and photographers throughout the mid-19th century. To further attract and interest visiting artistes, Denecourt remarkably named over 600 trees, 700 rocks, and numerous landmarks and points of view. Place names were often borrowed from mythology, contemporary and classic western history and literature; which provided an opportunity for Denecourt to entertain visitors with stories, myths and legends, mostly of his personal invention. Many of the caves, grottoes and ‘ancient’ structures were built under his aegis and locally licensed to food, beverage or souvenir purveyors. His efforts were directed toward attracting visitors who would then purchase his traveller’s guide: L’indicateur de Fontainebleau : itinérairedescriptif du palais, de la forêt et des environs, (literally Fontainebleau places to visit, a guide and description of the palace, forest and surrounding environs) which was published in eleven editions from 1839 until his death in 1875.

The success of Denecourt’s efforts came in 1849 with the arrival of the railway from Paris, allowing one-day easy access for anyone with a free afternoon and a couple francs for carriage fare. Called the Sylvain de la Foret de Fontainebleau (literally the Forest Spirit of F…), Denecourt’s efforts culminated in 1861 with Fontainebleau becoming the world’s first nature preserve (11 years preceding the world’s second preserve, Yellowstone in California, USA).

Widely lauded as one of the early pioneers of modern hiking, Denecourt personally carved 1100 kilometers of forest walking trails and about 300 kilometers of footpaths (called centiers in French), throughout the forest. Ancient photographic practitioners hauled their large and ungainly cameras along these wilderness paths to capture their version of the natural scene. More recently, my images reference the work of the 19th century photographers Baldus, Le Grey, Couvier, Le Secq, and Mestral among others. Printing in Platinum, a process patented in 1883, I seek to reproduce the vision and methodology of those early photographic pioneers.

The scenes here presented appear exactly as they did to those who first captured these images more than 160 years ago. I know. I found their tripod marks.

Technically, I use an antique Deardorff and 150mm and 240mm lenses of uncertain lineage and ancient vintage. An extra suitcase with a dozen 8 x 10 film holders and my Gitzo carbon fiber tripod is always part of my luggage. Hand carrying several boxes of Ilford 400 HP5 through customs has thankfully never resulted in X-ray damage. Retunring to my home in Cleveland, Ohio, USA, the film is developed in Pyro (PMK), proofed on Ilford Multigrade and hand printed in palladium/platinum.

Articles, Featured
January 20, 2022 22
The Accademia del Disegno (“Academy of Design”), which opened in 1563 Florence, Italy was the world’s first academy of art. Prior to that time, to...

Articles
September 3, 2020 3
This picture is about a woman who was assassinated by the Nazis in the Rumbula Forest in Latvia during World War II. Even though she...

Articles
September 9, 2020 3
One thing is certain that the sensitivity of human beings, even any organic being including plants, has some latent potentiality to interact with music. It...