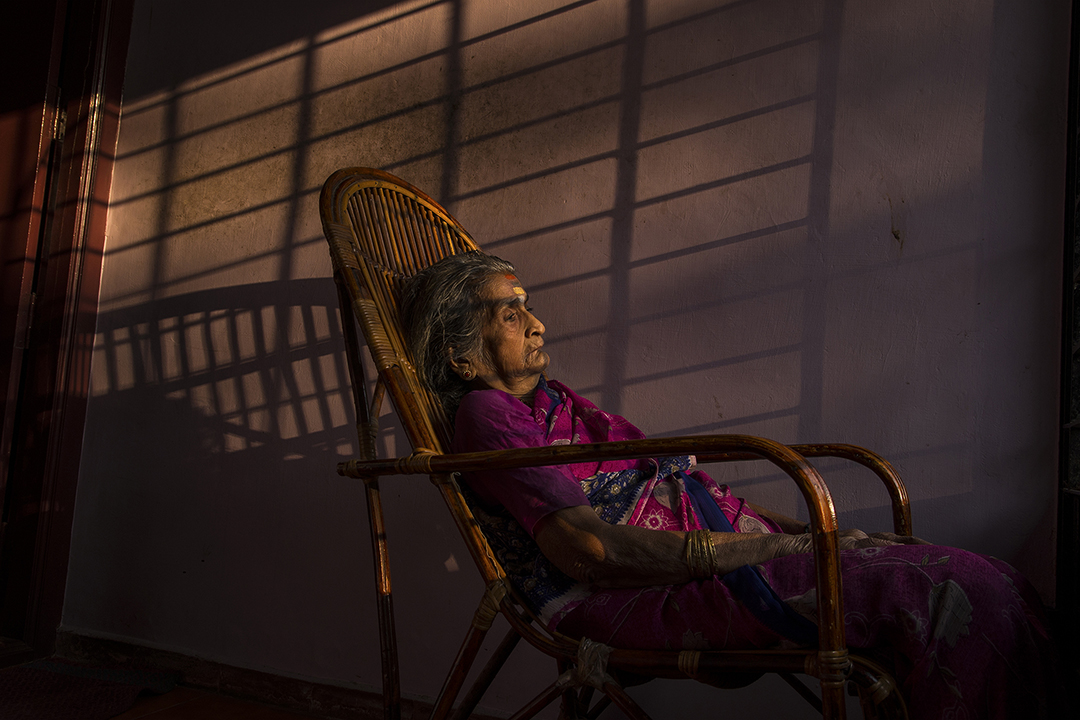 She prefers to be alone in her favourite nook by the door facing the east.

Her activities are performed in the little space which houses a sofa, a door leading to the small sit-out and an iron grill through which she peers at the world outside.  Soft light coming through it in the mornings bathes her and illuminates her little spaces without and within.

She battles the demons who reside in the confined space of her shrunken brain, mottled with age and dementia, and slips into severe bouts of depression and withdrawal.

The space in which she prefers to spend her mornings, is the lifeline that leads her from the darkness of her addled mind to the brightness of a day with its myriad, infinite possibilities.

Loneliness is miniscule while solitude is large hearted. Loneliness closes in around you, dragging you along into its depths. Its roots grow bizarrely inwards, entangled in an internal conversation that no one listens to. Solitude expands out to the Universe, taking you along with it to merge with Infinity, and it has its roots entrenched in the great pregnant silence that encompasses all of Time and Space. Loneliness is failed solitude.

Maybe loneliness needs to be re-defined to a generation that has grown up with constant network connectivity, and  knows to be lonely only when it is down. A youngster gazing at the illuminated screen of his magical mobile is seldom lonely in the truest meaning of the word. The power of connectivity that the little gadget in her / his hand affords, spreads across multitudes of closeted spaces, harmonizing them. Yet the harmony thus achieved does not reach an acme of revelry… of communion.  Spaces of loneliness and solitude have been replaced by spaces of emotionless connectivity. Even in the absence of despair and mirth, existence continues.

The question to which an answer is not easily arrived at or attained continues to haunt us in the meanwhile, again.

Is she wasting herself in her terrible loneliness or is she reveling in her glorious solitude?

Is her space one of loneliness and impending death or one of solitude and wilful living?

Maybe the imprint of her soul, which she herself leaves upon the glowing wall of life, could be the clue that helps one to deduce the answer to this eternal riddle caught in the vortex of Time and Space.

Articles, Featured
January 17, 2022 23
We are witnessing how a virus-induced pandemic is repeatedly reducing humankind to an unprecedentedly disconnected and scattered state. The pandemic has alienated us from the...