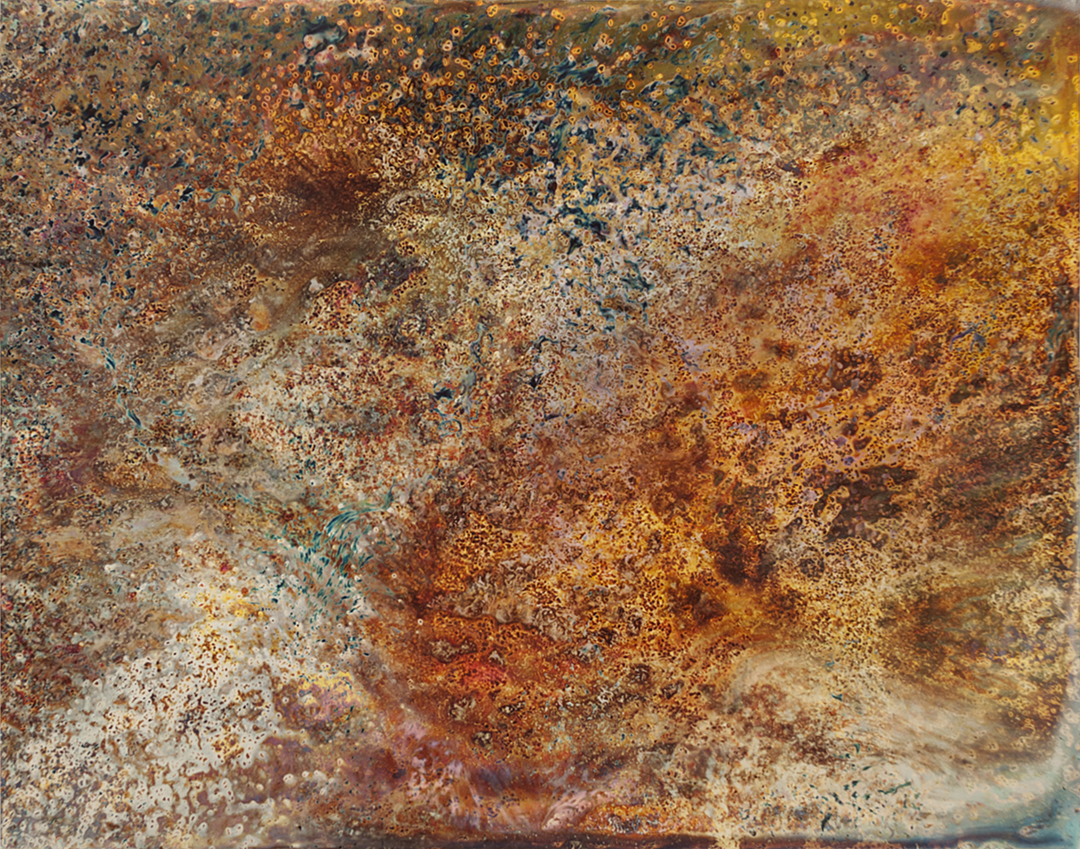 Treatises on alchemy were full of allegories that relate earthly materials to heavenly bodies visible in the ancient sky. The cosmos flowed through their crucibles as they strove to unlock the secrets of their chemical art.

In Carl Jung’s study of alchemy, he saw many of the same enigmatic symbols his patients confronted as the psyche attempts to achieve wholeness and unity. For Jung, the goal of turning lead into gold was as much about the transformation of the alchemist as it was a search for material wealth.

The different stages of the alchemist’s work are akin to the many rites of passage we undergo as we strive to create a balanced psyche and a complete Self. To speak to this journey, I like to leave the symbols in my imagery on the verge of interpretation – such that the work is about suggestion rather than description.
I often compare my images to the concept of illuminated manuscripts – not in the sense of supporting a particular dogma, but in the way those small religious works offered the viewer a personal communion with the sacred handmade object.

The concept of mystery religions and the anthropology of ceremony also inform my work. With rituals concealed from outsiders, only the initiated could understand the symbols and hidden truths of the mystery religion. Those who study ceremony note that, through a series of dignified acts, one title is left behind as a new status is adopted. However, in between these old and new states of being lies a space known as the liminal stage of ceremony. During this middle portion of ritual, things are “betwixt and in between.” One is without a solid status and one stands on the threshold of possibilities and understanding.

I view my darkroom process as a sort of photographic ceremony. The blank sheet of light-sensitive paper starts as nothing, and emerges from the process as something. The ways in which the photographic paper reacts to the chemistry are as important as the artist’s hand that initiates the process. Many who study ceremony see it as means of maintaining social or religious traditions.

However, some anthropologists view the concept of ceremony as a way of establishing new cultural identities. The 175+ years since the invention of photography have witnessed more change in more aspects of life than any other period in human history. I offer my work as a sort of photographic mystery religion for our cultural space.

Articles
August 9, 2020 3
The Nadupathy tribal hamlet is situated a couple of kilometres from the railway track to Coimbatore, inside the Walayar Reserve forest. The chieftain who is...

Articles
September 3, 2020 3
This picture is about a woman who was assassinated by the Nazis in the Rumbula Forest in Latvia during World War II. Even though she...