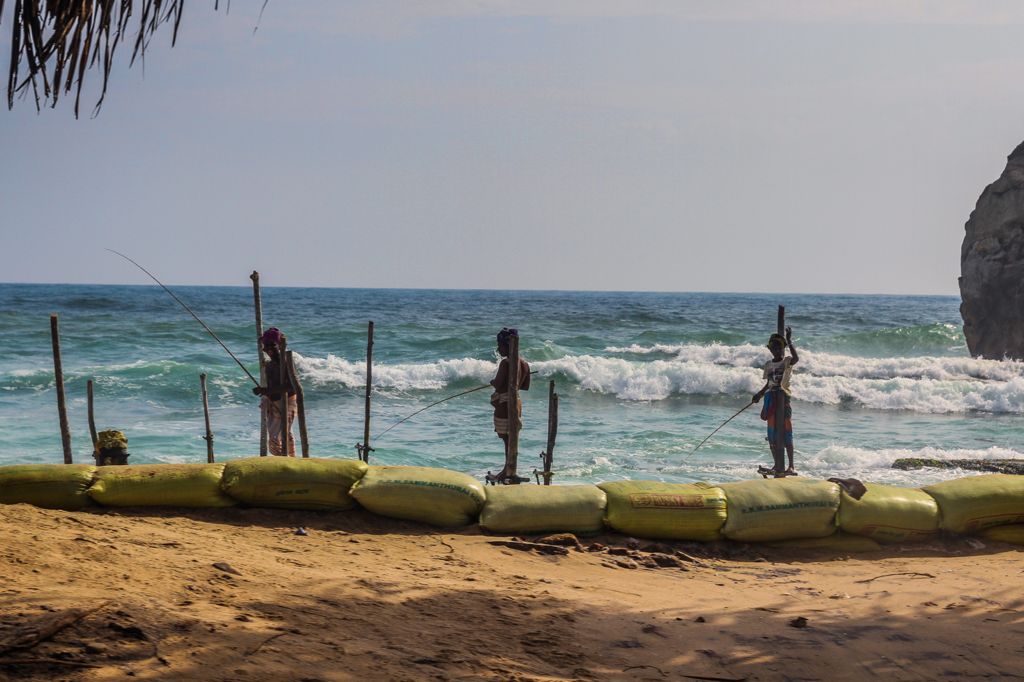 A few fishermen sitting perched on top of crude crucifixes of sticks and twine are patiently waiting for a catch far from the shore. While the crashing waves fizzle out on the shoreline, they dangle the fishing rod in one hand and hold the crucifix in the other, balancing to stay atop in the middle of a stormy sea. They have no shirts or shoes, all that adorns their body is a small towel covering their heads and a ragged sarong covering their slim waists. A small plastic bag, tied around their waist to hold the fish that they catch, flutters in the wind. The picture looks like from a bygone era and I was left speechless when I stumbled upon this picture-perfect photograph by American photographer Steve McCurry in my college days.

The practice of stilt fishing which was limited to the southern coastline of Lanka, grabbed the attention of the world, thanks to McCurry’s 1995 iconic photo. After that, stilt fishing of Weligama even made its way to the front cover of the Lonely Planet Guide to Sri Lanka.

When we planned to celebrate our son’s third birthday in Sri Lanka, one of the first things that I included in the itinerary was stilt fishing because the photo clicked by McCurry was deeply sitting in the corner of my mind. I wanted to see those fishermen firsthand, I longed to capture their actions myself. I was full of energy thinking I may discover some new perspective!
I imagined myself taking the silhouettes of stilt fishermen in the backdrop of the sunrise, the most beautiful moment of the day. The perfect time when everything comes to life slowly and an enthusiast photographer cannot ask for a better moment than this.
Weeks later and traveling through the island, we visited a couple of beach towns before arriving in Weligama. Trust me, I had been watchful of the potential presence of stilt fishermen on each beach we visited but did not find any. Not even a single trace of stilts either.
When inquired with the locals about their whereabouts, they all directed us to the area of Weligama. So, at last on an early morning, we headed straight towards Weligama to see and capture the action of stilt fishing.

On the way, our driver and guide, Alex, said, “It is not at all old madam. It started after the second world war.”

I quipped, “But still it’s old enough, right? You and I were not even born during the world war!”

“Yes, madam. It is not some ancient traditional practice like how people think and feel looking at those pictures,” he laughed.

I nodded in agreement. The practice of stilt fishing started during World War II as the country faced food shortages. Regular fishing spots were over-crowded and fishermen were prompted to find alternative routes to catch fish. Some started standing and sitting on the wreckages of capsized ships and aircraft in the sea looking for a catch. Gradually, they started erecting stilts in coral reefs.

No surprise that God has created human beings in such a way that each time they find a beautiful way to adapt to a new situation. Thus started ‘Ritipanna’, the Sinhalese term for stilt fishing, along the southern coast of the island. This method of catching fish became popular in the areas of Unawatuna, Ahangama, Koggala, Welipenna, Kathaluwa, Thalarambe, Midigama, Weligama, and others.

A practice to beat the food crisis:
The practice of stilt fishing which started as a means to beat the food crisis did not stop after the war. The island nation got its independence from British rule in 1948 and got its own government, coming under the fold of modernization. The poor fishermen, who were unable to afford sophisticated equipment for fishing, continued the tradition followed by their fathers.

There was zero investment. The poor men had to feed their whole families using a ‘kithul’, a fishing rod made out of fishtail toddy leaf, sitting on a ‘petta’, a crossbar tied to a vertical pole nailed onto the seabed a few meters offshore.

While ‘petta’ acted as a plank for them to sit on, each stilt accommodated only one fisherman. Sitting on petta is no less than an art, requiring a lot of patience and endurance. Striking a balance perched atop a narrow pole is no easy job. Moreover, it demands them to sit several hours waiting for a catch in absolute silence. Call it a meditation? Yes, you can, if you want!

Sitting still and silent for hours in the same position, they feel numbness in their feet. But alas, they cannot move or change their position, as even a slight disturbance in the surrounding alerts the fish and they swim away. And the fishermen cannot afford to lose their catch.

They choose a spot where and when the currents pass in the right direction providing them abundant supplies of fish even close to the shores. This usually happens in three months of a year – October, November, and December – especially at the sunset hours.

Not just poor fishermen, even well-to-do fishermen started to do ‘ritipanna’ during the southwest monsoon, as the sea got very rough. They lined up on the southern coastal belt at dawn and dusk, making it a peak season for stilt fishing. Their session began before the sunrise and extended till 8-9 am, and in the evening it started from the blue hour and stretched even after the sunset.

Stilt fishermen usually caught small fish like the spotted herring and tiny mackerel and if they were lucky enough to catch more, they sold them to people who came from nearby villages to buy their catch at their fishing location.

Myth busted:
“So two generations of fishermen have used this technique to catch fish?” my husband asked Alex with disbelief.

Alex nodded with a smile.

Soon, we reached Weligama and we sighted some men sitting on the stilts. A group of tourists had parked their bus and their guide was bargaining with some men. It’s another fact that the guides and drivers get a small amount of money as commission for taking tourists to those stilt fishermen.

Alex slowed down. In my excitement, I lowered the window glass to take pics, even before Alex stopped the van. Then came 2-3 guys running close to the window.
One said, “Only 500 rupees. Stop the van, take the photo.”

I smiled, without taking my eye from the camera. A man started hurling words at me, while another tried to grab my camera using abusive words. Men sitting on the stilts started shouting, “money first, money first…”

They started running behind the van banging with their fists. Till that very moment, I wanted that picture-perfect shot, but suddenly it occurred to me that I’m looking for something that doesn’t even exist anymore. It was a huge slap on my face to realize that the action which I longed to frame was absolutely a big fat lie. It was like asking someone to re-enact the practice, they’re just actors and models posing for a quick buck.

Alex increased the speed and refused to stop the van there. I was utterly shocked by the rude approach of those men. We took refuge in silence as the van silently vroomed towards Galle.

At last, Alex broke the silence after driving some miles away: “See sir, no one knows if there are any real stilt fishermen left or if only fake ones are posing for tourists!”

Photo for money:
“In 2011, I took a tuk-tuk and reached Weligama to photograph these men. As they saw my camera, they started demanding money. When I refused to pay them, those men came down from their stilts. Those who continued to sit on them covered their faces with a cloth. Some men even started shouting at me,” remembered Dino Palazzi, an Argentinian living in Doha, Qatar.

Palazzi had a dream of photographing the Sri Lankan stilt fishermen for a long time. So he didn’t give up. He went to the same spot on another day with a telelens and hid behind the rocks to photograph them.

“But then I saw a group of tourists and the posers started asking them for money and I left the spot,” Palazzi said.

He did try to photograph those men during his two visits among his five trips to the island nation and later gave up.

“I tried my luck on my way to Mirissa during another visit, but the experience was almost similar to the previous one. Later, I gave up the idea of photographing them,” he added.

It may be just me and a few others like Palazzi who refuse to pay for those posers. But there are a lot of tourists like Mohd Zulakbar Bin Abdullah Omar, a native of Malaysia, who readily pay them to get some pictures.

“I photographed stilt fishermen in Koggala. Since my guide had asked me to not pay any money, I refused to pay. By the way, it was a small amount…” remembered Omar, hinting that he would have paid had his guide not asked him to do so!

Location decides the charge:
Later, I watched McCurry’s talk about his epic photograph of stilt fishermen. “So many of these young men now find it more profitable to work in the tourist industry. We’ll look back in years to come and be amazed at the method of fishing and how we once were as a planet. It’s very important to document these kinds of events,” said McCurry.

Many genuine stilt fishermen have been rehabilitated and have taken up farming or resell fish purchased by other fishermen who go out deep into the sea.

So why this fake posing? Even after the tsunami, tourists started coming back to the same spots looking to freeze the moments of stilt fishing in their cameras. It was an easy way for posers to pose and make some easy money without any actual pains of fishing.

Moreover, fishing stops completely during the annual monsoons. So, the real fishermen started renting out their stilts to people who pose as fishermen for photographs.

“They charge more during the sunset, madam,” Alex added.

White foamy waves lashing at the seashore, while the descending sun bathing the stilts in soothing shades of crimson red and orange… Silhouettes of dark lean men sitting like saints on these vertical stilts meditating patiently to catch a bite lingered in my mind. I laughed at my imagination and opened the windows to soak myself in the cool breeze coming from the sea as our van vroomed towards Galle.

Articles
August 9, 2020 3
The Nadupathy tribal hamlet is situated a couple of kilometres from the railway track to Coimbatore, inside the Walayar Reserve forest. The chieftain who is...

Articles
August 18, 2020 2
Initiated mainly by light and other methods of representation photography designates a world of visual art that was previously in the domain of painting. The...