BARBECUE REPUBLIC: A Requiem for Flesh 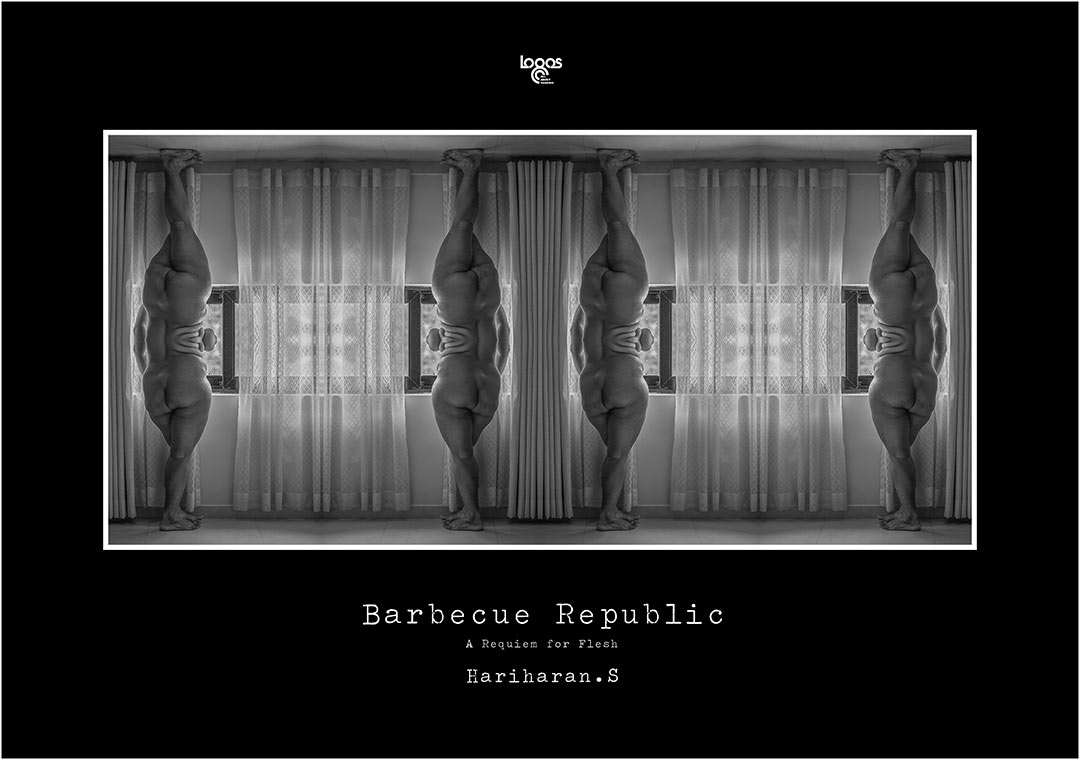 Japanese art historian and curator Taro Amano once said: “Photography is ambiguous, because it is both real and surreal: on the one hand it represents fragments of reality, but on the other it cannot say anything about reality as a whole. And yet, this impossibility is often capable of revealing human psychologic depth and aspects of our unconscious.” The works from the ‘Barbecue Republic’ brought back this luminous statement again into mind.

Conceived in 2016 and completed in 2020, BARBECUE REPUBLIC is a series of art work by Hariharan S. created from his exclusive photographic work. The work was accomplished among the various troubles of life, work, illness and the perils of COVID pandemic.

“I wondered how I would be able to exhibit my work before a populace who were unsure whether they would be alive or dead in a couple of days. Such was the fear and dread that the new virus had invoked in us. In February 2021, a couple of friends urged me to bring out the series as a photo book”, says Hariharan.

In the concept note about his work, Hariharan writes:
“The face of Truth is covered with a brilliant golden lid; that do thou remove, O Fosterer, for the law of the Truth, for sight.”

“It is in the Isopanishad, one among a whole lot of ancient Hindu scriptures, whose learning was restricted to men from the three “higher” castes that the above verse which epitomizes the attitude of the regimes that have ruled this land over the centuries could be found. It even affords legitimacy to this trickery perpetrated by the rulers. We have forever mistaken the glitter of the golden lid to be the truth and adamantly refused to even take a peek into the vessel either due to ignorance or fear.

The image which adorns the cover of this book was not shot as part of this series originally, but added to it as an afterthought due to it effectively portraying the trickery which was discussed by us now. This was part of a series originally created during the lockdown of 2020 and was captioned “Edifice with four carefully carved pillars”. It was incorporated (with all the pragmatism of a corporate, perhaps) as it served as a perfect reflection of the contemporary reality that the Republic finds itself in. A beautiful edifice, with its four mainstays bearing aesthetic carvings. Its windows are draped with the finest curtains that shut out the sight of the smoldering flesh slabs and diminishes the scorching odour of burning flesh…
Truly, all is well that ends well”.

Instead of trying to explain my images it would perhaps augur well if I shared a few associated happenings that influenced me in my creation and led me to arrive at a form of expression that like the X- Ray or CT scan would try and determine the ailment that lay within the finery adorning the edifice.

I have to start with Beethoven.
He and his symphonies, surprisingly found favour with the Third Reich. It was his Symphony No:9 played over the public address system that welcomed the Jewish prisoners pushed out of the cattle boxes that brought them to the extermination camps. The infirm and the children, separated from the others on arrival, were led to be gassed and incinerated. Though the Reich expressly forbade the intermingling of the members of the supposedly pure Aryan race with those of the “impure” Jewish race, the urge to dehumanize drove the Nazi guards to run comfort rooms in the camps. Young and healthy Jewish women inmates were opted in as comfort women. The testimonials of the women who survived, submitted during the hearings held after the war describe the horrors inflicted upon them by the Nazi guards.

The guards loved to gang rape them brutally and to drown their screams of pain, Beethoven’s symphonies were played loudly over the public address system. What feelings would have the 9th Symphony invoked in these women if they had heard it in their later lives? Would it have imparted to them the same euphoria of bonding with mankind that it so magnanimously affords us?

Wagner, while extolling the virtues of Symphony No:9, described it as the redemption of Music from out of her own particular element into the realm of Universal Art. The Symphony No:9 is also called the ‘Choral’ Symphony because Beethoven took the highly unorthodox step of writing the fourth movement for four vocal soloists and a chorus, setting parts of Schiller’s uplifting poem ‘An Die Freude’ (Ode to Joy), which has as its theme, the universal brother/sisterhood of mankind.

Regimes the world over, don the arty cloak of culture even as they continue the gang rapes in the basements. The law of Truth continues to be concealed by the glitter of the golden lid.
The other major influence was the series that the eminent British photographer Platon Antonieu did at the Panzi Hospital in Congo at the behest of its founder Dr. Denis Mukwege. Rather than the images he shot, it was Platon’s description of Dr. Denis and his work that left a lasting impression in me. The Panzi Hospital treats those women, and the tens of thousands more who have been violently raped since the war ended, victims of Congo’s wartime legacy of impunity. By dint of his copious experience treating rape victims, Dr. Denis Mukwege and his team have become experts in repairing the tears between the vagina, anus, bladder and bowel often sustained during sexual violence and gang rape. While a rape is often a mere statistical figure for most of us, the victims live through hell… characterized by searing pain, deep and long tears, gangrene, pus and an acute feeling of revulsion and dehumanization.

If my imagery revolts you… if it challenges your conventional quest for beauty that the nude female form is expected to exude… it is precisely because the events that forced their creation and their effects are particularly ugly and revolting. It is up to the viewer to decide for him/herself if his/her gaze should be stopping with enjoying the glitter of the golden lid alone or should be continuing and peering into the cauldron of horrors and be revolted by the frightening truth that lies within.”

Eminent art historian and curator Johny M. L. writes about the book:
“In his photo-book ‘Barbecue Republic’, Hariharan S brings forth the idea of subjection of the body through a series of semi-gendered imageries. Structurally strong and aesthetically evocative these photographs find their image-form in a nude fe/male body and its manipulations through photographic as well as digital technology. The sort of dismembering of the body in order to conjoin it in bizarre combinations provides an interface to understand the idea of subjection and manipulation.

The disavowal of conventions by the artist regarding the perfection and beauty conceptions pertaining to the female body emphasizes the inconsiderate and callous manipulations that the state could inflict upon its subjects. This body of works should be a result of the ongoing peasant and citizen struggles in various parts of the country (and elsewhere) in which often the human bodies are brought under extreme surveillance and torturous conditions. That ‘cabined, cribbed and confined’ feeling that the dispossessed and the abjured citizenry experience is palpable in these images.”

The book was launched on November 6, 2021, by P.K.Medini, the lone surviving woman freedom fighter of Kerala and a revolutionary singer. Eminent artists Vivek Vilasini and Ishrath Humairah spoke at length about the series and the book.

News
November 11, 2020 11
The French artist Soumisha Dauthel's works are the fruits of encounters of her pictorial expression and research into the form of the painting. The artist...

‘My Art’ by Vivek Vilasini

News
August 4, 2021 17
Saturdays are dearer nowadays. The wait for those two evening hours from 7 to 9 dedicated exclusively to art is always rewarding. PhotoMuse, even though...